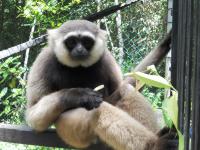 Abug is doing well. He is always with Jack.

Abug is now with a female gibbon named Jack.

Abug is just fine. He is active. He like also to go down to the floor to search for insects.

Abug is fine at our center in Pararawen, Muara Teweh.
Abug is always agressive with humans. He jumps and try to catch us when we are close to the cage.

Abug was sent to our new center at camp Pararawen, Muara Teweh.

It is a sad day. His partner Dolly died, just after having given birth to her baby. The baby was dead too...

Abug and Dolly are fine. They mating a lot

Abug have a new female gibbon. Her name is Dolly. They are nice with each other.
Before Abug was sharing his enclosure with 2 females gibbons, Sita and Kiki. Sita died on
November, 2007. And his relation with other female Kiki was not good. Abug was agressive with Kiki. So we decided to take Kiki and put her in another cage.

Abug is a male gibbon of species Hylobates Agilis albibarbis. One gibbon specy that lives in the south of Kapuas river and in the west of Barito river in Borneo, Indonesia.
Year of birth (estimation) : 1998.
Abug was confiscated in Avril, 12th 2003 in Kapuas, Borneo Central.
Medical test : Abug is infected by Tuberculose.
Notes :
Pararawen Conservation Center and Sanctuary, Muara Teweh, Borneo.