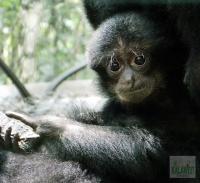 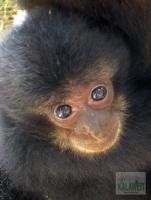 In the morning, Angel swing, sing and like to play with the ropes.

Sometimes he sit on a branch for a while before he start to swing again.

Angel is fine. He is now alone in another cage because Angel was agressive with his mother Angkung.

On December 03, 2015 Angkung gave birth to a baby. He's a male. We call the Bebe Ozzie. Angkung and her baby are fine.

Angel and her parents are fine. They are active in swinging, singing and playing together.

Angel is a baby Siamang (Symphalangus syndactylus) from Ile Sumatera, Indonesia.
Angel was born on June 26, 2013 at Kalaweit.
His parents Zacky Dewasa and Angkung are a couple of siamangs in Kalaweit program.
Observations :
Supayang Conservation Centre and Sanctuary, Solok, west of Sumatera.