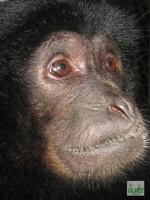 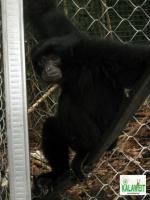 Aming and Kresna are now in a temporary cage in the forest at Solok, West Sumatera.

They have to stay in this cage for a few months.


Aming and Kresna are now together as a couple. They are just fine.


Observation made by: Andre.

Aming likes to play with extended strings. He bites them and shoots them. After playing, Aming starts looking for insects.

When the team comes to give the fruit, Aming moves everywhere in the cage. Then he sits near the manger to wait for his fruit.

Aming takes and eats fruit when the team moves away from the cage.


Aming's fine. He is active in swinging, playing and singing with other siamangs and Gibbons.

Aming plays with his paws. He catches them and bites them.

Aming does not like when there is human near the cage. He's going to jump and hit the fence with his paws.

Aming is active in swinging.

He always takes and eats bananas first. After it takes and eats other fruits like papaya, pineapple, watermelon, mandarin, cucumber, carrot and bean.

Aming likes to eat near the feeder.


Aming is transferred to our shelter for animals of Sumatera in Supayang, Solok, west of Sumatera.


Aming's fine. It is now in our refuge which is located on the island Marak, west of Padang, Sumatra.


Aming is a male Siamang (Symphalangus syndactylus) from Sumatera, Indonesia.

Like other wild animals, Aming suffered a trauma when people captured him and brought him away from his universe, the forest and all its inhabitants ...

His life in freedom ended when people put a chain around his neck.