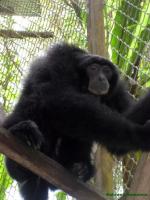 He is always with his partner Momo.

Ajun is fine. He is now with a female gibbon name Momo.

After balancing, Ajun likes to sit on an extended branch.

Ajun eats well the fruits and other food as chicken, hard-boiled egg and milk.

Ajun eats his food well. He always takes and eats bananas first. After it takes and eats other fruits like papaya, watermelon, pineapple, mandarin, cucumber, carrot and bean.

Ajun likes to eat by the feeder.

Ajun are active in swinging and singing at the top of the cage.

Ajun spends a lot of time at the top of the cage. He only comes down when he wants to take his fruit.


Ajun goes well on our cenre for the siamangs and gibbons of Sumatra which is on the island Marak, west of Padang.

Ajun is a male Siamang (Symphalangus syndactylus) who can be found in Sumatera, Indonesia.
The estimate of the Year of birth: 1998.
Ajun was confiscated in Jakarta, the capital of Indonesia. He arrived at Kalaweit Sumatera on 02 December 2010.
The result of the blood test is negative. Ajun is healthy.
Notes :
Supayang Conservation Centre and Sanctuary, Solok, West Sumatera.