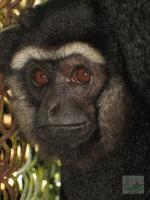 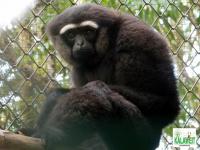 He is active and eat well his fruits.

In the morning, Amang like to sing with otjers gibbons in the center.


He is active in swinging, singing and looking for insects in the cage.

When the team comes to give the fruit, Amang will sits and look at the team on an extended branch at the top of the cage.

Amang comes down and approaches the manger when the team moves away from the cage.

But in order to take and eat the fruit on the feeder Amang looks at the surroundings first. He has this habit since the presence of a wild gibbon who likes to come to take the fruits.

After balancing, Amang likes to sit and lie down on an extended branch. There he spends time looking for lice.

Amang eats his food as well. He takes and eats the bananas first. After it takes and eats other fruits like papaya, watermelon, pineapple, mandarin, cucumber, carrot and bean.

Amang likes to eat on an extended branch at the top of the cage.


Amang is now at our new refuge in Supayang, Solok, west of Padang.

Amang's fine. It is active and eats well its fruits.

Amang was active in swinging and singing at the top of the cage. Amang only comes down when he wants to take the food.

Amang also likes to bring and eat his fruit at the top of the cage.

Amang is active in swinging and singing at the top of the cage.

Amang sings as loud as other gibbons and siamangs. He likes to sing standing on a tree branch.


Amang is a male gibbon (Hylobates agilis Ungko) from the island Sumatera, Indonesia.

Amang was recovered a Sumatera on 09 January 2003.

Amang has thick and black fur, well supplied in sunlight. Amang is very acrobatic and he sings hard too.