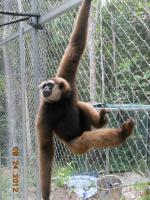 He is always with his partner Mina.

Alex is fine. He is always with his partner Mina.


In the morning, Alex and Mina also sing with the other gibbons.

After singing, Alex likes to move and hang himself at the top of the cage. Sometimes he goes down a bit to look for insects or leaves.

Alex and Mina spend a lot of time at the top of the cage. Alex likes to hang out at the fence to look around.

Alex sees a lot at the top of the cage. He likes to hang out at the fence to look around.

Alex also sings with his partner.


Alex and his partner Mina are fine. They are active and eat the fruit well.

Alex likes to hang himself in a corner at the top of the cage to look around.

They are active and eat their food well.

Alex often sees himself at the top of the cage. Mina is aggressive. She likes to jump to the fence to catch us when we pass by the cage.


Alex is now with a female gibbon called Mina. Mina is nice.

Alex and Mina soon became friends. They sing together and mate.


Alex is transferred to our new center located in Muara Teweh, Borneo Centre. Alex is fine.


A sad day for Alex ... his companion Nure left him. Nure died because of a disease.


Alex is placed with a female of the same species called Nure. Like Alex, Nure was before with another gibbon that has had a son. But unfortunately her companion and son are deceased. Alex and Nure have not shown aggressive behaviour. They get along well.

In the morning, Liony and Alex are placed in a new aviary. Liony approached Alex a lot. But Alex ignored her. He moves when Liony approaches him. Liony was a little aggressive when he ate. She intimidated Alex when Alex wanted to enter the hallway to take the food.


Alex is a male gibbon of the species of Hylobates agilis albirbarbis, one of gibbons species who lives on the island of Borneo in Indonesia.
Estimatimation of his birth: 1997.
Alex was confiscated in Jakarta, the capital of Indonesia. He arrived at Kalaweit the 9th of Aug 2007.
The results of the blood test showed us that Alex is infected with hepatitis B and tuberculosis.
Alex is very quiet. When we're near the cage, Alex likes to hang himself on the wall to look at us.
Notes:
Pararawen Conservation Center and Sanctuary, Muara Teweh, Central Kalimantan.