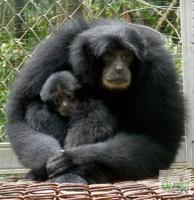 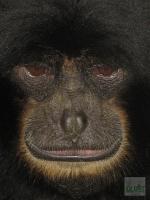 She is always with Zacky Dewasa and her son Ozy Kecil.

In the morning, they swing and sing with others siamangs in the center.

Zackey Dewasa and Ozy Kecil like also playing together.

They like to eat first bananas before eating others fruits like pineapple, water melon, orange and papaya.

Angkung and his family are all fine.
They are active and eat the fruit well.
June, 24 2021
Angel was separated from Angkung because he was too agressive with Angkung.

On December 03, 2015 Angkung gave birth to a baby Siamang. He's a male. We call the baby Ozy Kecil.
Angkung and her baby are fine.

On 26 June 2013, Angkung gave birth to a baby siamang. Angkung and her baby are safe.
We call her baby Angel.

Angkung's fine.
Angkung is active in swinging and singing with other siamangs and gibbons.
In the morning. Angkung likes to swing on the ropes that are half-height from the cage.
At midday, Angkung likes to sit or lie down in the hut.
Angkung ate his food well.
This month, the veterinary team also gave him treatment against pests.

This month, Zacky Dewasa and Angkung got back together.
February 2012: Angkung is fine. She's still in a cage alone. Zacky Dewasa is going as well.
His baby Napoleon is fine. There's still room in a brooder. As Napoleon is still very small. The vet team gives him milk.
On December 11, 2011 Angkung gave birth to a baby siamang. Around 07:30, Angkung was weak. She was lying down.
Then around 10:30, Angkung began to agitate as she wanted to give birth.
From 1:30 p.m. to 2:15 p.m., medical intervention to help him.
7:00 p.m., the veterinary team had anesthesier Angkung to assist her. The veterinary team had to pull the baby and push the belly of Angkung to get the baby out.
Around 9:30, the baby was able to get out. He's safe.

Angkung is a female Siamang (Symphalangus syndactylus) of the island Sumatera, Indonesia.
The estimate of the Year of birth: 1997.
Angkung was arrived in Kalaweit Sumatera on 26 November 2004 from Jakarta.
Blood test results: Angkung is infected with herpes Simplex.
Her story:
Angkung was released by Kalaweit from a person who kept her in Jakarta and was very skinny when she arrived because she was not fed regularly. She was captured by hunters who killed both her parents and was kept in captivity in a very small cage. She got very stressed out.
Notes :
Supayang Conservation Center and Sanctuary, Solok, west of Sumatera.