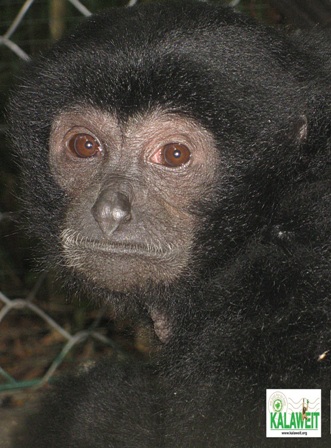 
Amin is fine. He is now with a female gibbon name Kajol.


Observation on terrain by: Andre.

Amin likes to play with his paws by biting them. He also plays on the floor of the cage.

After playing, Amin likes to look for insects in every corner of the cage.

When the team comes to give the fruit, Amin swings and hits the fence with his legs.

Amin takes and eats the fruit when the team moves away from the cage.


Amin's fine. He is active in swinging, playing and singing with other Siamang and Gibbon.

Amin always likes to play with his paws. He bites his paws and strikes them against his head. Amin also pushes little cries when he plays.

Amin also likes to play with the rest of the fruit. He resumes, rejects and attrapeen jumping or swinging.

He is active in swinging and eats his food well.

Amin takes and eats the bananas first. After he takes over and eats other fruits like papaya, watermelon, pineapple, mandarin, cucumber, carrot and bean.

Amin likes to eat near the feeder.


Amin's fine. He's active in swinging and playing. Amin likes to play by biting his paws.

Amin is active in swinging and playing on the floor.

Amin likes to roll on the floor. He's playing by biting his paws.